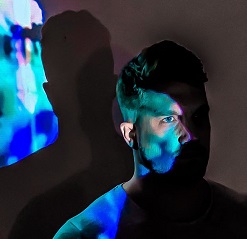 Bloom’s Taxonomy has been a regular and very welcome performer at Open Frequencies, the London EMOM night that takes place once a month at The Troubadour in Earls Court. He also has a track called Spominiks on the latest EMOM double CD compilation album and his new EP ‘Bitter Lake’ is out in April.

Bloom’s Taxonomy is William Fraser who describes his music as leftfield electronica. I’d also add experimental, ambient and melodic to that definition. I was lucky enough to get a preview of the EP before the launch gig on 12 April at Shortwave Café in Bermondsey, London.

The EP includes six tracks ranging from the sweet piano loops and unpredictable changes of Burgess Park to the mellow and chilled beats of Bitter Lake. Many artists creating sounds in this field of music making will hit on a theme that pretty much stays the same throughout a whole track, sometimes as long as ten minutes of repetition. The great thing about the tracks on this EP is that they all evolve and change shape, sometimes coming back to the original concept and other times becoming something completely different. Love and Grace Machine is one such example beginning with a trip hop beat and slowly becoming an orchestral string driven piece before moving into a section of field recording with background sounds. Taurus – Littrow features some particularly lovely and shimmering lead guitar, one of the features of Bloom’s Taxonomy live show that I really enjoy. The electric guitar complements electronic music beautifully in my opinion. The EP plays out with the upbeat and highly danceable Balconies, possibly my favourite track on the EP.

Although the EP isn’t out at the time of writing you can listen to the opening track Spominiks which is also included on the EMOM album right here:

The EP launch takes place on 12 April at Shortwave Café in Bermondsey, London with live musical and visual performances from Bloom's Taxonomy. The night also features other EMOM favourites including Electret (experimental IDM), Aemaer (down-tempo/ambient) and Xylo Aria (down-tempo electro-pop).  If you’re in London get down to what promises to be a wonderful night of music.