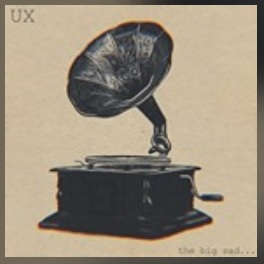 A new album called The Big Sad by UX is out now and far from being in any way ‘sad’, it happens to be a very joyous and uplifting listen. Sampled strings and catchy synth riffs underpin thoughtful lyricism such as ‘I’d rather fail than not try at all’ and ‘they call it a switcheroo’.

UX are Dan Elsmore and Stuart James who are based in Stoke-On-Trent where there are some very creative things happening on the music front at this time. Must be something in the water. Though much of it appears to be percolating through the community owned and run venue that is Pilgrims Pit. Check out High Viz Jackit Theory, Behind the Moon, Custard Bass and Digital Buddhist to name but a few.

UX have been in operation for just over three years and have developed and honed their music craft during this time. The new album is their best material yet. Having said this it needs to be stressed that UX have always been a great band to see play live with a performance that is like no other. Stuart singing and heading banging in front of a midi keyboard and lap top, and Dan using up the whole stage area for his back to the audience unique moves, which involve losing himself (and often one of his trainer’s) in the moment.

A neat twist to the new album is that each track morphs into the next to form one solid piece of musical theatre. The whole piece extends to nearly thirty minutes of alternative anthemic dance music. There are highs and lows along the way like you’d expect from any good narrative.

I had the good fortune of seeing UX perform the entire album at the launch just before Christmas and this is exactly how they handled it. No need for explanations. No stops and starts. Simply a continuous drama of sound that was played out on the stage in front of the lucky people that were there. It was exhilarating and also exhausting. And that’s exactly how good music should leave you feeling. Good times! 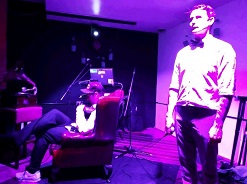