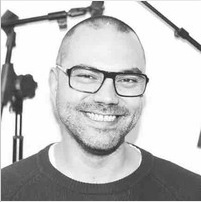 Sergio Cabrera Hernandez is an Audio Engineer, Sound Designer, Music producer and all round great guy based in London. He runs Wood End Lane Productions in Northolt. Sergio has been an active supporter of the EMOM movement since its arrival at The Troubadour in Earls Court and the monthly Open Frequencies event. During the last year he has attended most of the events and has also recorded hours of live electronic music as performed on the nights. These recordings will form the basis of a forthcoming release, 'Electronic Music - Live at The Troubadour'. Sergio also contributed as #b to the recent YMNLTxEMOM Volume 2 release with a beautfiul and original track called Milacrosa that kicks off the entire album.

I'd like to thank Sergio for his hard work and commitment to the nights. Listening through the wealth of material that has been performed by a wide range of artists is an amazing journey and one which I hope you will be able to enjoy soon (subject to agreement from individual artists). This wouldn't have been possible without Sergio's help.

Sergio provides specialist recording, mixing and mastering to electronic musicians. This is an important area of expertise which many recording studios are unable to provide as they have a focus on acoustic and band orientated music making. If you have an EP or Album to record, or would like to get a fresh pair of ears for that track you’ve been struggling with, talk to Sergio. He can be contacted at the following email address.