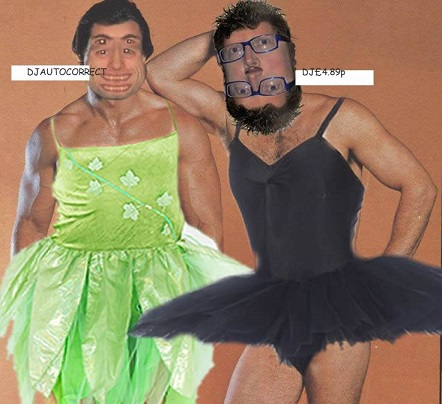 It’s not everyday someone writes a song about you. Although let’s be clear ‘Martin Christie’s Gilet of Fudge’ is not a song as such, it is the sound of a man chanting in Yorkshire tongues over various bleeps, buzzes and machine noises. Hard to decipher lyrics describe what sounds like the conundrum of being in a kitchen full of healthy food yet being drawn to something else, a healing Gillet of fudge perhaps, though I’m not quite sure and wouldn’t want to ask.

To over analyse DJ AUTOCORRECT (Jim McKerchar) and DJ £4.89p (Robert also Dexta Baxter) would be a mistake. Unpredictable, techno, glitch and drone influenced sounds abound, with an underlying and important wry sense of humour - check out that group photograph for a starters (above). They also come up with THE best titles for their pieces like ‘It Was A Quiet Day At The International Carrot Museum Café’ and ‘Holding Back Your Ears’.

To be fair I’m writing in the collective here about two separate artists, but that’s because their latest release is another collaboration in the form of a home-made mix tape. I got my copy a few days ago (pictured below) and have been playing it through an old tape deck I retrieved from the darkest recesses of the attic. The tape features eleven tracks which I’ve listed at the end of this article.

Despite the surrealism and GSOH (spell check that) you get this sense that a lot of inherent skill and thought has gone into the tracks on this release.  The tracks build and change in just the right places and the experimentation has structure. What I mean by that is there is a musical influence here even though the duo may be trying to shake off such references. It all adds up to more than just two blokes making a noise in a kitchen somewhere in West Yorkshire. Decide for yourselves here:

2. Is there something wrong with us apart from the obvious?

3. Martin Christie's Gilet Of Fudge [BONUS TRACCK FROM SOME OTHER RELEASE WE DID]

4. Is Australia still a part of the world yet?

5. I bet you can't tell if it's a heart attack or an aneurysm.

7. The unlikelihood of. Being Me.

8. Are you leaving that's your hair?

10. She's got things on other things.

11. Sum Wear Oh The The Ruinbow 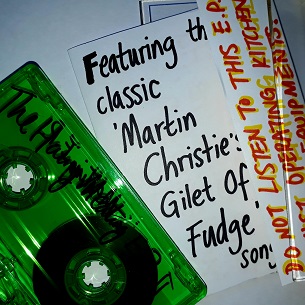